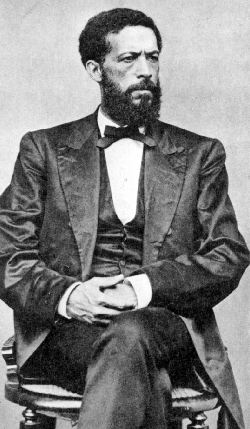 John Mercer Langston was one of the most extraordinary men of the 19th century. Slim and debonair, and of mixed-raced parentage, Langston was highly educated, an expert in constitutional law, a community organizer and a gifted orator who sought to unify a divided country after the Civil War. He was the first African-American elected to a local office, winning the office of Clerk of Brownhelm Township on April 2, 1855.
Langston was the son of Ralph Quarles, a white plantation owner, and Jane Langston, a black slave. After his parents died when Langston was five, he and his brothers moved to Oberlin, Ohio, to live with family friends. Langston enrolled in Oberlin College at age 14 and earned bachelor's and master's degrees from the institution. Denied admission into law school, Langston studied law under attorney Philemon Bliss of Elyria. Langston became the first black lawyer in Ohio, passing the Bar in 1854.  He became actively involved in the antislavery movement, organizing antislavery societies locally and at the state level. He helped runaway slaves to escape to the North along the Ohio part of the Underground Railroad.
Langston married Caroline Wall, a senior in the literary department at Oberlin, settled in Brownhelm, OH and established a law practice. He quickly involved himself in town matters.  In 1855 Langston became the country's first black elected official when he was elected town clerk of the Brownhelm Township.
Langston moved to Oberlin in 1856 where he again involved himself in town government. From 1865 - 1867 he served as a city councilman and from 1867-1868 he served on the Board of Education. His law practice established and respected, Langston handled legal matters for the town. Langston vigilantly supported Republican candidates for local and national office. He is credited with helping to steer the Ohio Republican party towards radicalism and a strong antislavery position. He conspired with John Brown to raid Harpers Ferry.
Langston organized black volunteers for the Union cause. As chief recruiter in the West, he assembled the Massachusetts 54th, the nation's first black regiment, and the Massachusetts 55th and the 5th Ohio.  He was a founding member and president of the National Equal Rights League, which fought for black voting rights. During the Civil War Langston recruited African Americans to fight for the Union Army. After the war, he was appointed inspector general for the Freedmen's Bureau, a federal organization that helped freed slaves.  He was the first African American to practice before the U.S. Supreme Court.  Selected by the Black National Convention to lead the National Equal Rights League in 1864, Langston carried out extensive suffrage campaigns in Ohio, Kansas and Missouri. Langston's vision was realized in 1867, with Congressional approval of suffrage for black males.
Langston moved to Washington, DC in 1868 to establish and serve as dean of Howard University's law school — the first black law school in the country. He was appointed acting president of the school in 1872. In 1877 Langston left to become U.S. minister to Haiti. He returned to Virginia in 1885 and was named president of Virginia Normal and Collegiate Institute (now Virginia State University). In 1888 he ran for a seat in the U.S. House of Representatives as an Independent. He lost to his Democratic opponent but contested the results of the election. After an 18-month fight, he won the election and served for six months.  Langston was the first black Congress member from Virginia and a diplomat. He lost his bid for reelection.
The town of Langston, Oklahoma, and Langston University, is named after him.  The John Mercer Langston Bar Association in Columbus, Ohio, is named in his honor along with Langston Middle School in Oberlin, Ohio, the former John Mercer Langston High School in Danville, Virginia, and John M. Langston High School Continuation Program in Arlington, Virginia. His house in Oberlin is a National Historic Landmark.  Langston was the great-uncle of poet Langston Hughes. 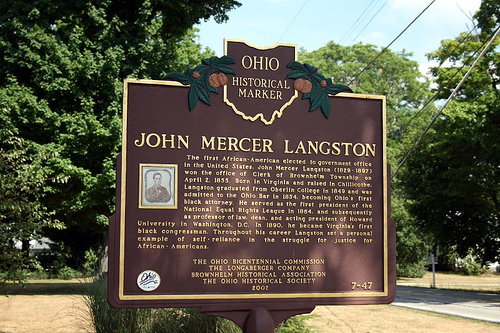 It took 153 years to get from John Mercer Langston to Barack Hussein Obama, a journey that endured the dashed hopes of Reconstruction and the oppression of Jim Crow to arrive at a moment that has stunned even those optimistic about America's racial progress.
The John Mercer Langston Ohio Historical Marker is located at Brownhelm High School, 1940 North Ridge Road, Vermilion, Ohio.  The marker reads: "John Mercer Langston" The first African-American elected to government office in the United States, John Mercer Langston (1829-1897) won the office of Clerk of Brownhelm Township on April 2, 1855. Born in Virginia and raised in Chillicothe, Langston graduated from Oberlin College in 1849 and was admitted to the Ohio Bar in 1854, becoming Ohio's first black attorney. He served as the first president of the National Equal Rights League in 1864, and subsequently as professor of law, dean, and acting president of Howard University in Washington, D.C. In 1890, he became Virginia's first black congressman. Throughout his career Langston set a personal example of self-reliance in the struggle for justice for African-Americans.

NEXT: The Legend Of Gore Orphanage & Swift's Hollow