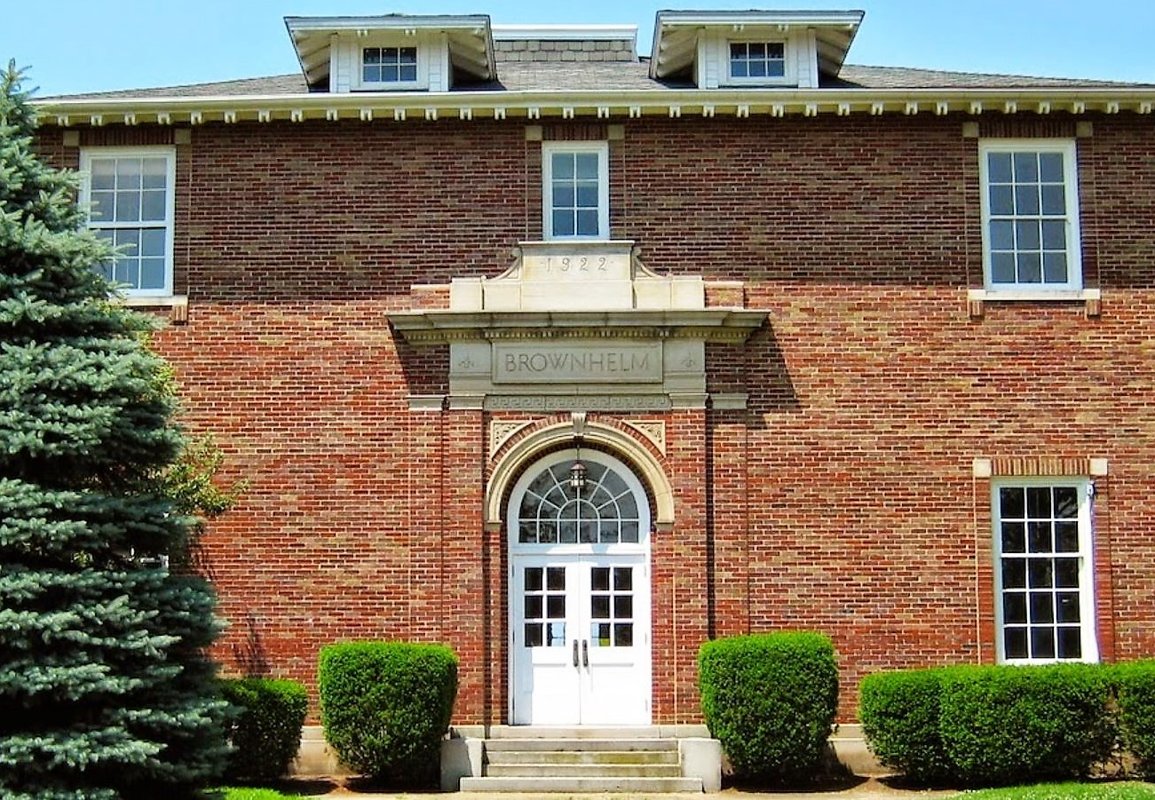 1950 North Ridge Road
Vermilion, Ohio 44089
The Brownhelm Historical Association is renovating the former Brownhelm School (1889-1988) located at 1950 North Ridge Road. The Historic Brownhelm School & Museum offers a place for meetings, hosts the annual Brownhelm Community Christmas, provides events for the community, and hosts fundraisers such as the annual Grandma’s Attic Sale. Upstairs classrooms house museum space displaying historical artifacts from the school’s past and from notable historical locations such as Swifts Mansion and the Light of Hope Orphanage.

Built in 1889, the original red brick school was square in plan with four evenly spaced brick pilasters along the front, back and sides. Evidence of these can be seen on the east and west sides of the school today. Ventilation and daylight were introduced into the interior by tall, narrow, double hung windows. The building had a steeply pitched hip roof.

In 1905, an addition was constructed on the west side of the 1889 building. The current, less steeply pitched hip roof was added at this time. The roof has a deep overhang with carved wood bracked supports. Roof dormers and a cupola were added with this addition.

In 1922, the Brownhelm School was renovated and further enlarged to give it its present appearance. The renovation included a new red brick Neo classical/Georgian Revival front facade. The round top glass transom and stonework detailing give importance to the main entrance. The rear flat roofed brick and masonry addition contains a large combination auditorium and gymnasium. The present Brownhelm School offers a physical piece of history representing the last hundred years in Brownhelm.

The Brownhelm Historical Association has a 99 year lease with the Brownhelm Township Trustees to save this building. The exterior renovations were completed in 2012, partly due to an anonymous donor and several other fund raisers. The interior repairs began in 2013 – the goal is to complete one room at a time. 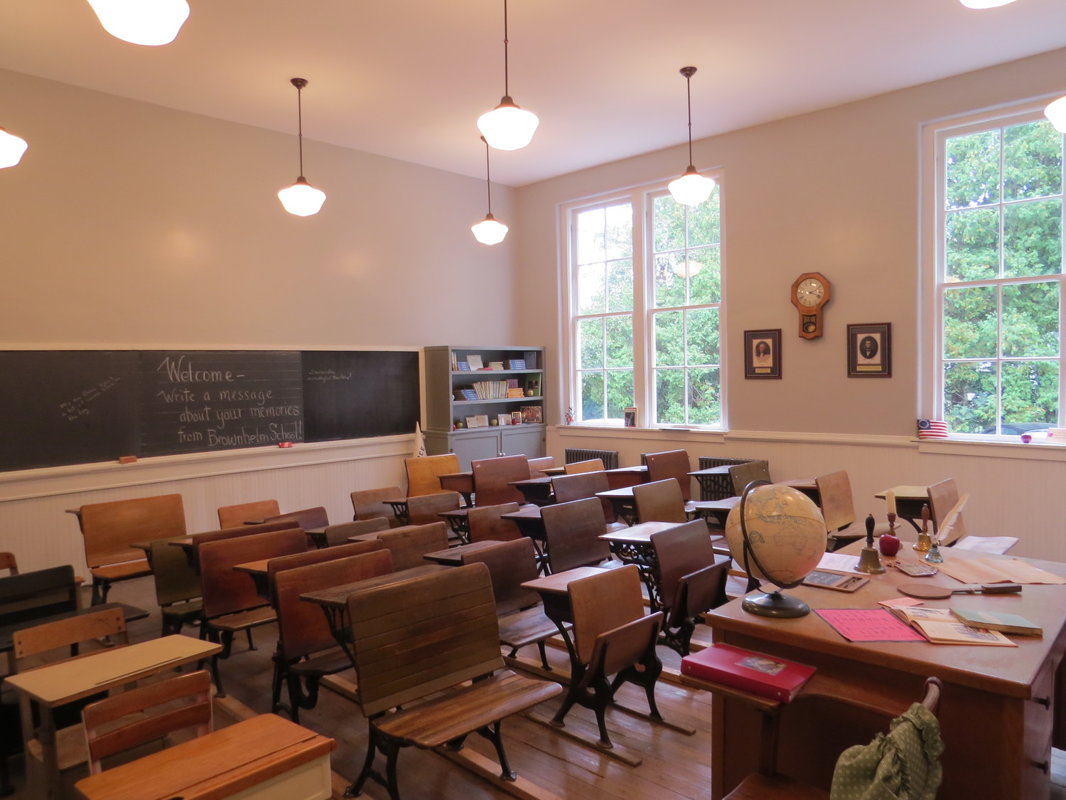 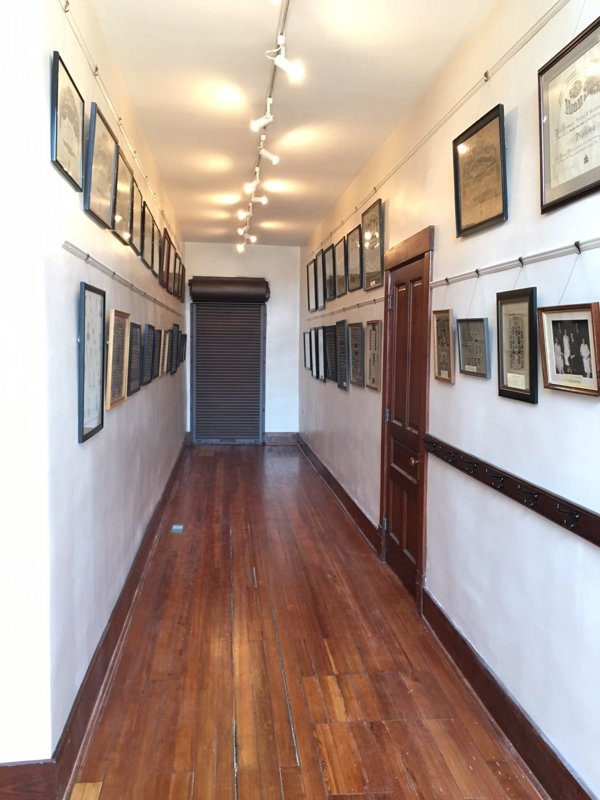 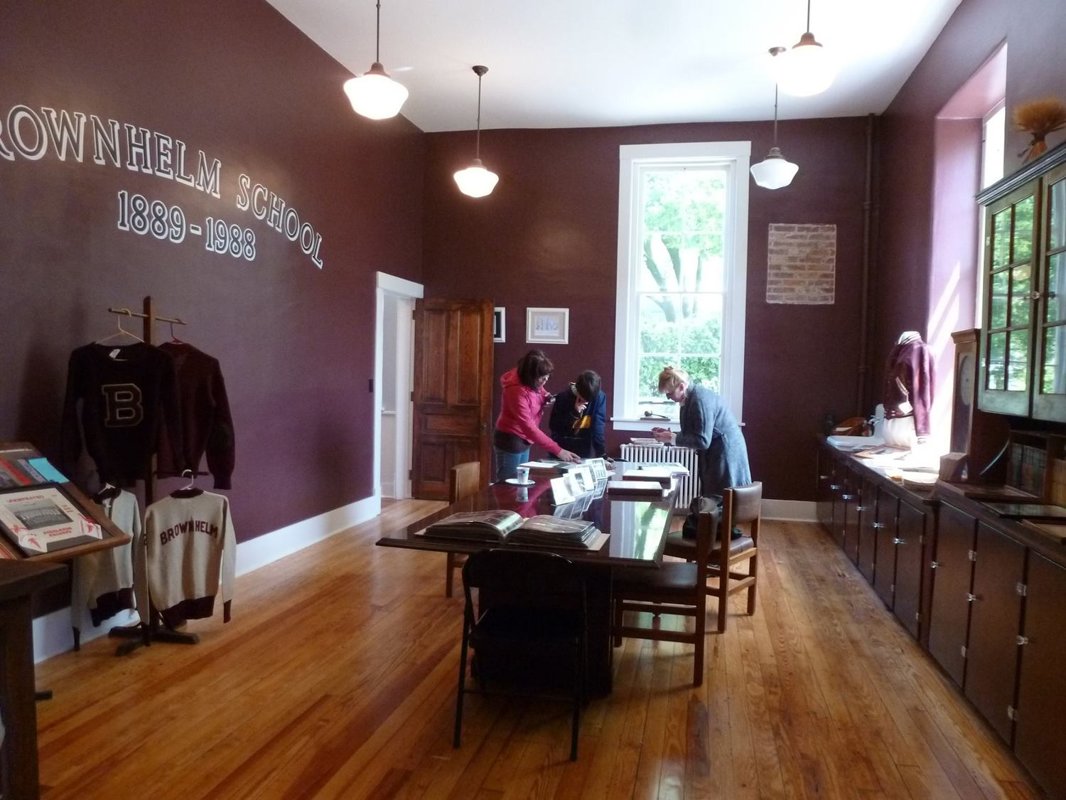 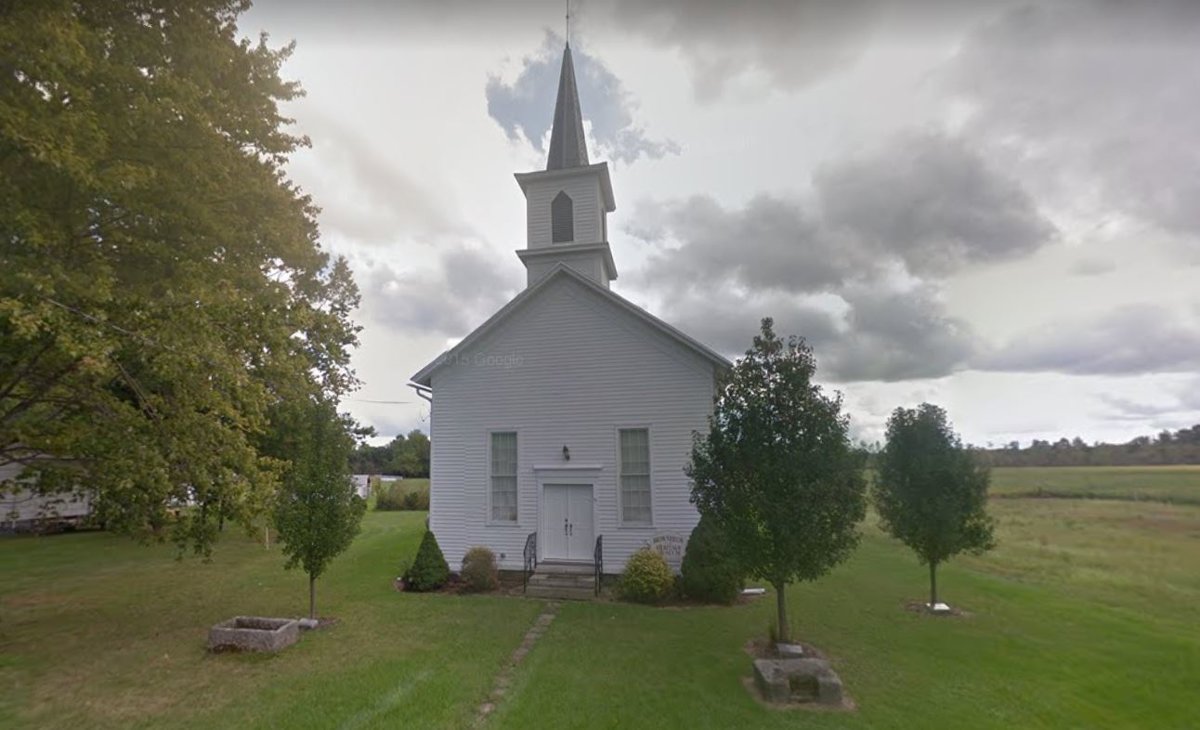 The Brownhelm Historical Association maintains the Brownhelm Heritage Museum at 1355 Claus Road, Vermilion. Built in 1870, it was formerly the German Evangelical and Reformed Church and was given to the association by its last 3 remaining members. The church was restored and it now houses many artifacts of Brownhelm history. 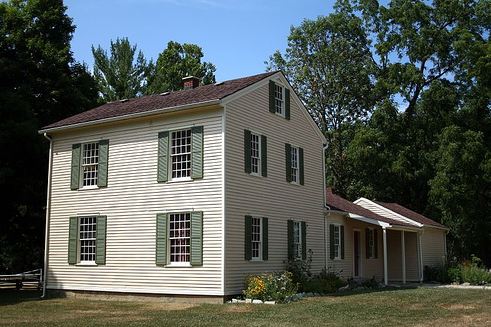 Surrounded by tall trees and a split-rail fence, you can't miss the picturesque Bacon House Museum and Carriage Barn at Mill Hollow. During museum hours you can walk through the original settler Benjamin Bacon's house, built in 1845. The museum features themes of daily living and puts an emphasis on the community life in Brownhelm, including the profound effect the railroad had on the economy and on people's lives.  Just next to the Bacon House Museum, the Carriage Barn offers visitors information about the park and hosts nature programs throughout the year. A large rustic meeting room can be reserved for groups and includes a kitchen and large fireplace. 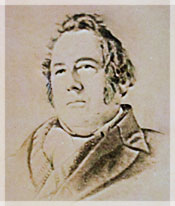 In 1817, Benjamin Bacon settled with his family along the top of the cliffs overlooking an oxbow in the Vermilion River that would eventually be called Mill Hollow. Soon afterwards, and at an early age, Benjamin was elected to the prestigious position of Justice of the Peace, and in 1824 was selected as one of the first commissioners for Lorain County. In 1835 he purchased an interest in a saw and grist mill that had been relocated to the oxbow in the river. A mill race was cut across the oxbow to increase the water power that turned the mill’s large water wheel. The mills were very successful and by 1845 had provided Benjamin the means to build a nice house across the road. When he died in 1868 at the age of 78, the house and mills were sold to John Heymann, a German immigrant new to the area.

Frederick Bacon was born in 1840, the youngest son of Benjamin and Anna, Benjamin’s third wife. In 1860, he enlisted in the Union army and fought in the Civil War for four years, after which he returned home to his wife Abigail (formerly Abigail Wells) and started a family in Brownhelm.

In 1879, John Heymann sold the mills to Frederick Bacon. They’d been modernized with steam power after a fire destroyed them in October of 1876 which started after the close of business. Frederick now not only owned the mills, but also owned land in Geauga county and coal fields in Iowa. This diversity was very fortunate because with the advent of the railroad, fewer farmers needed to mill their grain locally and many local residents weren’t even farmers, but rather worked at the sandstone quarries instead. By 1901, the mills were no longer profitable and had to be sold and dismantled. 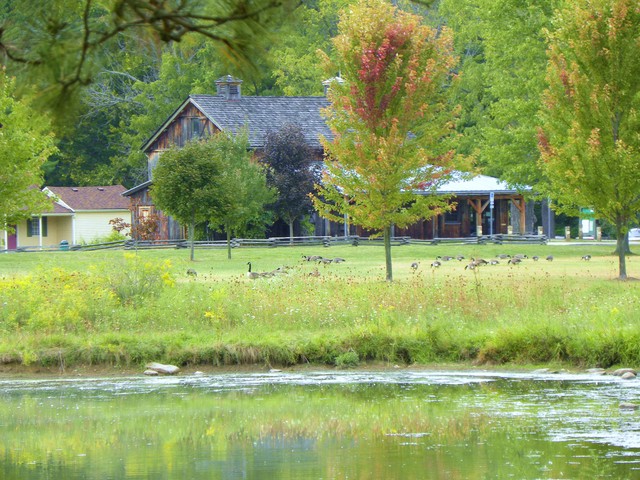 Frederick and Abigail had nine children, seven of whom never married. After Frederick’s death in 1901, his children continued to farm the river valley. By the late 1920s, only Sarah and Charles remained, and the house was rented to several people for decades until Charles’ death in 1957. Dorothy Bacon DeMuth, a distant cousin, inherited the property and donated it to the newly formed Lorain County Metro Parks. The Vermilion River Reservation became the first park in the Lorain County Metro Parks. The Bacon House was opened as a house museum in 1962 with the help of the Lorain County Historical Society. Today, the house is open on certain days throughout the year (check your Arrowhead newsletter for specific dates and times), and can be scheduled for private tours throughout the year by calling (440) 967-7310.

Spanning two adjacent areas separated by the Vermilion River—Mill Hollow on one side and Bacon Woods on the other—this immaculate park is a favorite of picnickers, naturalists and anyone who just wants to enjoy its natural beauty.  If you're looking to picnic in a beautiful place with plenty of activities for both adults and children, this is an ideal place to come. With 273 picnic tables and four reservable shelters, the Vermilion Reservation draws over 230,000 people a year—making it the number one picnic area in the Lorain County Metro Parks system. It's not surprising considering the spotless maintenance, plenty of open space, 5 miles of wooded trails, a playground and two ponds that attract visiting waterfowl year-round.

There's more than natural beauty at Vermilion Reservation. Bacon woods hosts a sizable amphitheater for musical concerts during the warmer months, and the park in general features several special programs including the Annual Car Show (which shows over 1000 cars.)  Perhaps the most striking feature of this reservation is the winding ribbon of shale cliffs carved by the Vermilion River. Millions of years old, these cliffs reveal layers of the past and drop bits of sandstone, shale and turtlerock along the riverbed. Since the Vermilion River has no industry along its banks, it is especially rich in wildlife. Aquatic life includes freshwater clams and several species of darters (small fish that feed along the bottom of the river) that turn brilliant colors during the mating season. Some insect species include mayflies, cadis flies and water pennies (beetle larvae that lie flat against a rock surface and look like pennies.)

The park naturally hosts a range of wildlife, but perhaps most singular at Vermilion River Reservation are the bald eagles. These magnificent creatures can be seen almost daily at Mill Hollow, perched in one of the tall trees near the center of the park. Other wildlife at the reservation is more typical of the area and includes Great Blue Heron, Greenback Heron and various geese and ducks.  Wildflower lovers come from all over in spring and early summer to see the color and variety of these indigenous species which include Dutchman's britches and Blood Root along with a long list of other species found throughout northeast Ohio.